Why You Need to Start Saving Money RIGHT NOW

That’s right. People who save aggressively in their 20’s and 30’s and then stop while they deal with other financial priorities like buying homes, educating kids, traveling the world, etc. can actually be better off than people who wait to start saving until 45 and plow money away until they’re 65. This seems a little crazy, so I did the math.

Let’s say you start saving at the age of 25, putting away $6,000 per year (that’s $500 per month or just $250 per paycheck if you’re paid every other week) and then stop at the age of 45. At that point, assuming a 6% moderate rate of return (meaning you invest the money in, for example, a target date fund aligning with your 65th birthday), you’d have $231,020 saved. If you stop saving at that point and just “let it ride” until you’re 65, that amount could grow to $764,723 assuming that same 6% average performance over the years.

(You know that saying, “You gotta have money to make money?” That’s evidenced here. Your money makes money for you.) 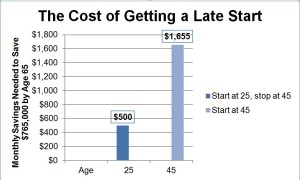 So even though in both scenarios you’d be saving for 20 years, by waiting to get started, you’d have to save more than three times as much each month to get to the same final result. That is crazy! But the math doesn’t lie. This just reinforces one of my favorite nerdy mantras: save early, save often.

But I get it. The challenge is finding the cash to actually get the early start, especially if you’re trying to pay off student loans and credit card debt. The lesson here though is that even a small amount of money saved early can make a huge impact on your future savings. So here are a few things I did that worked back when I had the same competing priorities:

1. Always get the match in your 401k. That’s a 100% guaranteed immediate return on your money and I’ve yet to find a legal way to achieve this any other way.

2. Live within today’s earnings (aka don’t borrow against the future). Our instant gratification society has us thinking that we need a posh lifestyle straight out of school, but that’s just a recipe for postponing financial independence. In order to stick to their savings priorities, my family lived in a small house in the boonies until my parents could afford a home with two bathrooms closer to town. Nobody liked having to wait in line for the bathroom, but there are no regrets about that today as they enjoy a safe and secure retirement before age 65! Let’s live more like that instead of elevating our lifestyle to what it would be at a higher income.

3. Sometimes it’s all in your head. Don’t rely just on willpower to save more money. Try using money mind tricks to help you stick to your intentions.

4. Start small. Even if it’s just $25 per paycheck, it’s better than nothing. That’s where I started. I then just raised the amount over time as my income increased and my debts decreased.

5. Use the auto-escalator tool. Check to see if your 401(k) plan has an auto-escalator, which lets you set your up your contributions for automatic increases at set intervals. Try setting up a 1% increase each year to coincide with your annual raise so you’ll never feel a reduction in your take-home pay. A 35-year old earning $50,000 who uses the auto-escalator to go from 5% to 15% over 10 years will have more than $250,000 extra saved at age 65.

The numbers don’t lie. If you’ve been thinking you’ll wait until you feel more like you can afford to save, it’s time to shift away from that mentality. You need to make yourself afford it now.

How about you? What ways have you found a little bit more money to save? Please let me know in the comments or send me a tweet at @kclmoneycoach.

There are multiple reasons to contribute to a Roth IRA, but if you make too much money, these arguments may ...
Read More